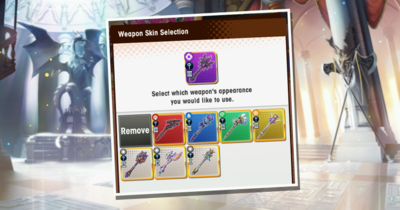 Weapon Skins is a feature that allows Adventurers to change the appearance of their equipped weapon. It was added in version 1.14.0.

During quests, an Adventurer may equip a skin over their weapon, giving it the appearance of another weapon. The stats, skills, and abilities of the "real" weapon remain unchanged - for all intents and purposes, this is purely a cosmetic feature.

On the teams screen and in co-op rooms, units with an equipped weapon skin will have a blue eye icon displayed next to them. Tapping a unit in either place will then show the name of the "real" weapon in the unit's summary page.

Weapon skins can be disabled from view in co-op rooms by going to "Game" -> "Weapon Skin Display Settings" in the "More (Green Book)" -> "Options" menu.

Unlocking a weapon as a skin simply requires that the weapon have existed in the player's inventory at some point in time. After that, the weapon skin is permanently unlocked, even if the original weapon is lost via enhancing, dismantling, selling, etc.

A running count of the total available skins can be found below:

To equip a weapon skin, go to the teams menu, tap an adventurer's equipped weapon, and then tap the "Weapon Skins" button in the bottom-right to select a skin. Note that skins can only mask weapons of the same weapon type: for example, a lance can be masked by another lance, but a lance cannot be masked by a wand.

Swapping the "real" weapon to a different one will instantly unequip whichever skin was currently in use.

Hundreds of weapons are available, however a large portion of those skins are similar in shape with a swapped color palette, or are outright identical visually:

On the Weapon Skins menu, similarity of skins is not considered: even if the player owns two skins that are identical, they are listed as two separate skins to choose from.

A few adventurers have weapon-skin-like effects on their weapons by default. Due to this, they are not eligible to use the Weapon Skin feature at all - the button in the teams menu doesn't appear.