This page lists content that have been found in the game files or explicitly leaked and have not been confirmed as Upcoming Content.

Unused content may or may not be released and should not be taken as final. 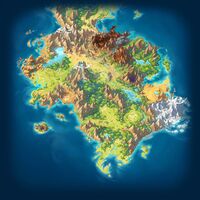 A full version of the world map is used as the background for chapter select, the continent of Grastaea, formerly the setting of Cygames' previous game, Knights of Glory.

The obtain method text for the

Looking Glass material for Castle Stories at one point read "Obtain these in the ‘Enter the Kaleidoscape’ event." “Enter the Kaleidoscape” was likely replaced with The Mercurial Gauntlet, seeing as the unused banner featured the character later named Fafnir Roy III. However, it remains to be seen whether Looking Glasses will be given out as rewards for The Mercurial Gauntlet. They are, however, possible to obtain when events and new castle stories become available from event rewards or trades.

As raid events have given out

Sunlight Ore for unbinding dragons and facility events have given out

Golden Fragment for unbinding wyrmprints, it is plausible that a future event will hand out

The following 3D models exist, or used to exist but are not being used actively as adventurer nor humanoid enemy:

The following wyrmprints reference characters from other Cygames's games. As wyrmprints depict events that have long past, not all characters referenced may be plausible.

The following are characters depicted in Wyrmprints that have not been seen otherwise. Whether or not they will appear as Adventurers is unknown.

There exists models for two unused Weapons within the game: a Lance and a Staff. However, the Staff does have a recolored version in the form of World's Fulcrum, the Staff obtained from Void Poseidon Strike.