Of Templars and Tales

From Dragalia Lost Wiki
Jump to: navigation, search
Campaign: The City of Grams

Despite defeating the soldiers, the party is subjected to the interrogations of the Grams Templars. But just as they are about to be dragged away, a mysterious interloper ends the situation without incident. This man turns out to be Gatov, the sender of the letter. 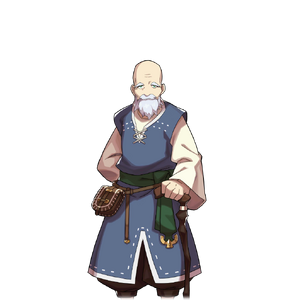 Elder: Thank you ever so much, kind sir. If I may, who are you people?

Ranzal: Just some do-gooders passin' through. Now get on in there while ya can!

Elder: Oh, no! I could never seek to go behind the Church's back! I will continue to try everything I can to obtain permission.

Chelle: Now then, Ranzal. Did we not VERY recently have a conversation where I advised you to refrain from engaging in conspicuous behavior?

Ranzal: Sorry, but when I see somethin' like that, I ain't the type to sit around on my butt twiddlin' my thumbs.

Elisanne: That armor... Those are Templars!

Cleo: It would seem they caught wind of all the commotion.

Luca: What's the plan? We booking it?

The Prince: If we ran now, it would make us look even more suspicious. We've no choice but to stay here and try to manage our way through this.

Templar Captain: We heard there were people here causing quite the ruckus. Was that you?

Ranzal: Who knows? Although there WAS some kinda brawl or whatnot happenin' earlier.

Templar Captain: You are clearly not citizens of Grams, yet your dress suggests you are no mere peasants. Name yourselves, strangers.

Templar Captain: I asked for your identities, not some cheap sidestep.

Chelle: Oh, very well. I had hoped to act with as much secrecy as possible, but there is clearly no hiding the dignity that oozes from my very pores.

Chelle: Given the situation, I've no choice but to be forthright and reveal my true self.

Chelle: Good Templars, permit me to introduce myself properly...

Chelle: I am the chairwoman of the Rose et Chaton Family Company.

Templar Captain: Then you people are merchants?

Chelle: Just so—and we have come here to stock our shelves with all manner of luxury Gramsian specialties.

Chelle: The goods here are of the highest quality, and they fly off our shelves and straight into the homes and hearts of many a fine and noble customer!

Templar Captain: Well, I suppose that makes sense. I'll see your permit, in that case.

Templar Captain: That's right. If you're here to buy goods, you will have been issued a commerce permit from the Church.

Chelle: Oooooh, THAAAAT permit! Yes, of course. Now where did I put it...?

Templar Captain: Surely a clever trader such as yourself would have their permit near at hand, yes?

Chelle: Oh, that's right! Silly me! I must have left it at the cafe we stopped into earlier.

Templar Captain: Enough of this foolishness! You people clearly have no permit—you're merely a gang of panicked fools attempting to spin your way out of trouble.

Chelle: Do I strike you as someone who panics, my good sir?

Chelle: Behold, the permit you so desired. Feel free to feast your eyes upon it until you are wholly satisfied.

Chelle: Of course it is! Who do you take us for? Now then, if we may, we're off to the marketplace to purchase our supplies. Be well, good knights.

Chelle: Heavens, but this is exhausting. What is it now?

Templar Captain: Your answers are too slick for my taste. We are taking you into custody so we might examine the matter further.

Elisanne: But we possess a permit, my good man! You have no reason to detain us.

Templar Captain: And yet if you want to pass so badly, you would know coin greases the way. Such is the way of things here.

Luca: You're a bunch of underhanded jerks!

Templar Captain: If you don't want any trouble, quiet down and obey. Otherwise...

???: Do you have some business with these people, my good captain?

Templar Captain: You! This has nothing to do with you. Begone from here at once!

Mysterious Man: I'm afraid I cannot do that.

Mysterious Man: The Rose et Chaton Family Company has signed a contract with me to guard the transportation of their goods.

Mysterious Man: So long as I have a contractual duty to protect them, I cannot turn a blind eye to this unfortunate situation.

Chelle: My my! It appears the mercenaries I hired have finally arrived.

Mysterious Man: If you're unhappy with the situation, then let us consider neutrality and entrust judgment to our fine law enforcement.

Mysterious Man: Although in that event, I must inform them about everything—including the fact you sought a bribe. Is this satisfactory?

Templar Captain: You think yourself far too important, little man. I shall not forget this!

Cleo: Whew! That was close.

The Prince: I can't believe you thought to arrange for a trade permit in advance, Chelle.

The Prince: And that you ALSO had the foresight to hire mercenaries for security!

Chelle: While I did obtain a permit, I actually have no memory of hiring mercenaries.

Luca: Then who the heck is this guy?!

Chelle: I have no idea! I simply saw an opening and decided to play along.

Mysterious Man: Your reputation as a capable woman precedes you, and I see it is well earned. You are a true marvel at thinking on your feet.

Gatov: My apologies. I am the captain of Grams's 12th Division Watch.

The Prince: You're the one who sent the letter to my brother Leonidas.

Gatov: I am indeed. However, I would suggest we save the finer points of this conversation for a later time.

Gatov: Permit me to guide you someplace safer. Come with me, everyone.