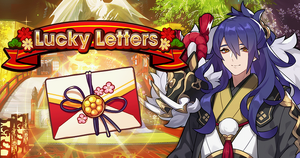 The Lucky Letters Raffle is an annual item-distribution event to commemorate the New Year. It was first held in December 2019.

The event is split into two parts: the distribution period and the raffle period.

Each lucky letter is assigned one of the following prize tiers:

Additionally, if the player possesses more than 10 lucky letters, the tenth letter is guaranteed to be a Fourth Prize or better.

When a prize is received, the item rewarded is picked from one of 5 possibilities, depending on the rank of the prize.