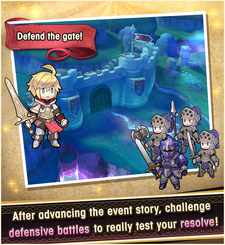 Defensive Events are an event type in which players must defend their castle Gate from waves of approaching enemies. For the first year of its existence, it only appeared in the Fire Emblem Heroes collaboration events.

Its primary rewards include Tomes for general versions, or in the case of the Fire Emblem Heroes versions: an exclusive Adventurer, weapon, Wyrmprints, and Stickers. 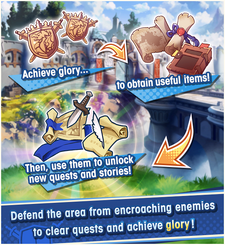 General Defensive Events include a prologue story as stated earlier, with additional story segments unlockable with

War Chronicles that can be obtained through

Glory (Event Point) rewards. Unlike the Fire Emblem Events, these stories do not need to be viewed in order to unlock other quests in the Defensive Event. Instead, further quests are unlocked through obtaining

Battle Charts, which are also obtained through 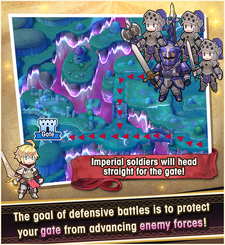 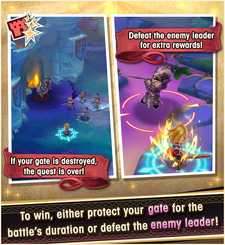 This is the primary mode of the event, usually called the "Defensive Battle" in-game, but named "Defend the Gate" here to avoid confusion. The player's gate is positioned to the southwest, while enemies will approach from a variety of routes throughout the map, advancing toward the gate. Enemies will usually spawn in waves, with their planned movement path outlined on the player's minimap at the start of the wave. The goal is to either keep the gate from getting destroyed by the enemies within the time limit, or defeating all waves and then defeating the Commander.

Succeeding in this mode requires that the player carefully manage their time near and away from the gate, as clearing far enemies can lead to a better clear times and rewards, but some enemies can spawn near the gate and/or behind the player in the middle of a wave, sneaking in damage on the gate. Enemy spawn patterns are fixed for each event, however, so the player can alternatively memorize when they should fall back to fight these mid-wave enemies.

Several different enemy types other than the standard soldiers can appear: 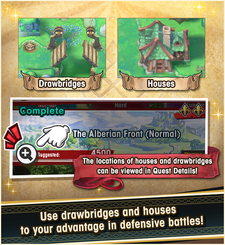 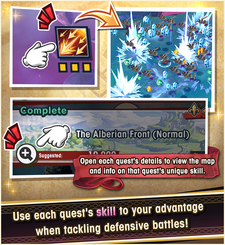 The Fire Emblem iterations of Defensive Events include a free 5

Adventurer that temporarily joins the player's roster. By completing quests with this character on the team, event-related or otherwise, friendship points can be earned[1]. Points earned are equal to the stamina cost for the quest cleared, but if an event-related quest is cleared then the points gained are doubled. Once friendship points reach their maximum, the Adventurer will permanently join the player's roster. Assuming the appropriate Mana Circle nodes have been unlocked, maxing friendship points will also make the Adventurer's story available to view.

This Adventurer usually has an element advantage over their event's boss.[2]. 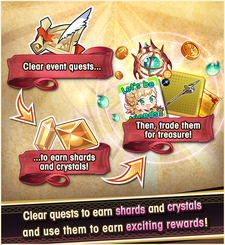 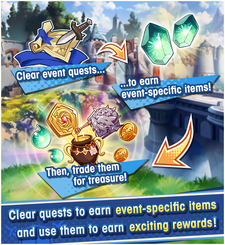 General versions of Defensive Events have only one form of currency,

Primal Crystals, which can be exchanged in the Event Shop for various rewards.

Each Defensive Event features a differently-named variety of Event Points that can be collected during the event. These points cannot be spent, but instead act as a score system, with rewards available depending on the total amount of points collected.

Event Points are available from all quests associated with a Defensive Event, but tend to appear in large amounts from the Defend the Gate battle. The amount of points gained can be increased by meeting certain objectives, such as clearing within a certain amount of time, or with a certain amount of health remaining on the Gate.

In the Fire Emblem Defensive Events, points can also be boosted by point-boosting abilities on equipped Wyrmprints.