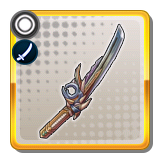 During his life, the ancient Emperor Dane saw his territory grow vast, but the continent's unity was quickly lost. Dane adored one far-off nation, and as such most favored eastern weaponry, which was still rare in those days.
HP
31 - 105
Str
148 - 494
Base Min Might
Minimum HP + Minimum Str + Lv. 1 Skill Might + Ability Might229
Base Max Might
Does not include external buffs (e.g. Dragons, Halidom, Wyrmprints, etc.)

Duplicate ValueWhat will be received instead if a duplicate is obtained (through drops, event rewards, etc)

This weapon does not have any abilities.