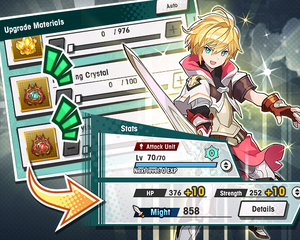 Augments are stat-boosting items that can be applied to adventurers, wyrmprints, and dragons. This feature was added in version 1.9.0.

A single augment adds +1 to HP or Strength when applied. These are considered additions to the base stats, meaning that stat-multiplying effects such as facilities or dragon passives can multiply the stats from augments.

The augment items are as follows:

Augments can be obtained from the following locations: 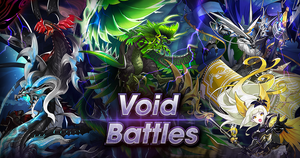 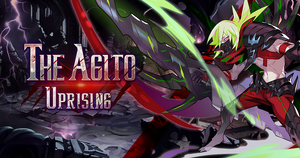 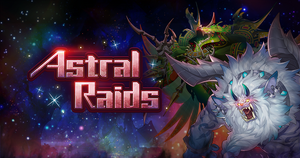 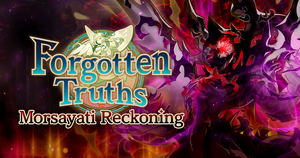 The ability to apply augments must first be unlocked by clearing Chapter 9 of the main campaign. While it is possible to obtain augments before that point, the chapter must be cleared before the augments can actually be used.

Augments can be applied by going to the Upgrade Tab -> Adventurers/Wyrmprints/Dragons, select a unit, and scroll down. This is the same as the location where exp-boosting materials such as

Succulent Dragonfruit can be applied.

Rupies, it is possible to reset augments. This will remove augments from the selected target, and return the augments to the player's inventory.

To remove augments, go to the Upgrade Tab -> Adventurers/Wyrmprints/Dragons, select the bottom-right "reset augments" button, and then select a unit.

The following is a list of the changes that have been made to this feature over time: